The 10k was the perfect appetizer to the Wine and Dine Half-Marathon weekend. While the 5k was technically the first course, the earliest I could travel to the East Coast was Friday evening, leaving my running to commence Saturday!

I arrived at the expo to pick up my bib on Friday afternoon and a lot had changed from previously attended race weekends. For this race, bib pickup was moved to the upper level of the HP Field House and the whole lower level was dedicated to substantial aisles and walls of weekend merchandise. Here, any runner could find pins to collect, shirts, jackets and numerous “I did it!” items to celebrate awaiting victories.

After collecting my bib and doing a quick walk through, I walked to a neighboring building, the J Center, to collect my race shirts and browse the exhibitors. While the complex seemed busy, Disney’s decision in expo placement provided a stress-free flow.

With an all yellow garb, red parasol in hand, this Dole Whip was ready to run! I stayed at All-Star Music and was pretty impressed to see a bus waiting to take me to the start! When I ran Princess earlier this year and Wine and Dine last year, I remember waiting in a line just watching buses pass because they were full.

A quick trip to the Magic Kingdom parking lot, had me in my corral at 4 a.m. with an hour and a half until go time! Luckily, the DJ ate his Wheaties and started a lip sync battle between the corrals to see which group of runners could demonstrate the most spunk and ultimately be named, “The Party Corral.”

Lip syncing and dancing to the beat of the music was definitely a fun way to pass the time and get a gentle warm up in before crossing the start line!

I was slightly apprehensive to write this review as so many people stating how much they loved this course, while I felt differently. I had run two other WDW 10k’s and the course was the same which went around Epcot and bordering hotels. Disney went overboard on the whole “going green” recycling act. While this year’s 10k race was a change of scenery, it worked it’s way from the MK parking lot through long stretches of construction. The first character stop were the Three LittlePigs, 2 miles into the course.

Just before mile 4, runners entered Hollywood Studios park, just behind the infamous Tower of Terror. Oswald greeted runners as they pounded down Sunset Boulevard. The short stretch was adorned with eager holiday lights and I could swear I could hear Christmas carols leaking from the speakers. A left turn onto Hollywood Boulevard whisked runners out of the park and onto a narrow stretch leading to the Boardwalk resort.

Runners soon hit the wood planks and were greeted by the benevolent Genie dressed in his vacation attire consisting of a Hawaiian shirt and Goofy hat! While he could not grant me any wishes, I pushed towards the back entrance of Epcot.

Runners entered just behind the United Kingdom, with Kenai and Koda from Brother Bear to cheer runners on toward the approaching finish line. I ran past Canada and made a straight shot for Spaceship Earth. The tremendous sphere was still radiating hues of purple and orange before the sun would rob the icon of it’s light.

Finally I was running into the parking lot and across the finish to accept my first medal of the weekend.

After collecting my medal, I drank some water and accepted a snack box from a volunteer. The lack of character stops and course left me undernourished. Four in the course of just over six miles is not very impressive. I have raced Disney 5k’s with more stops! I had heard a lot of people praising this course but the long stretches which were littered with construction is not something I can rave about. The good news was that the 10k race left me enlivened for the half course the next morning, promising three parks and more entertainment. 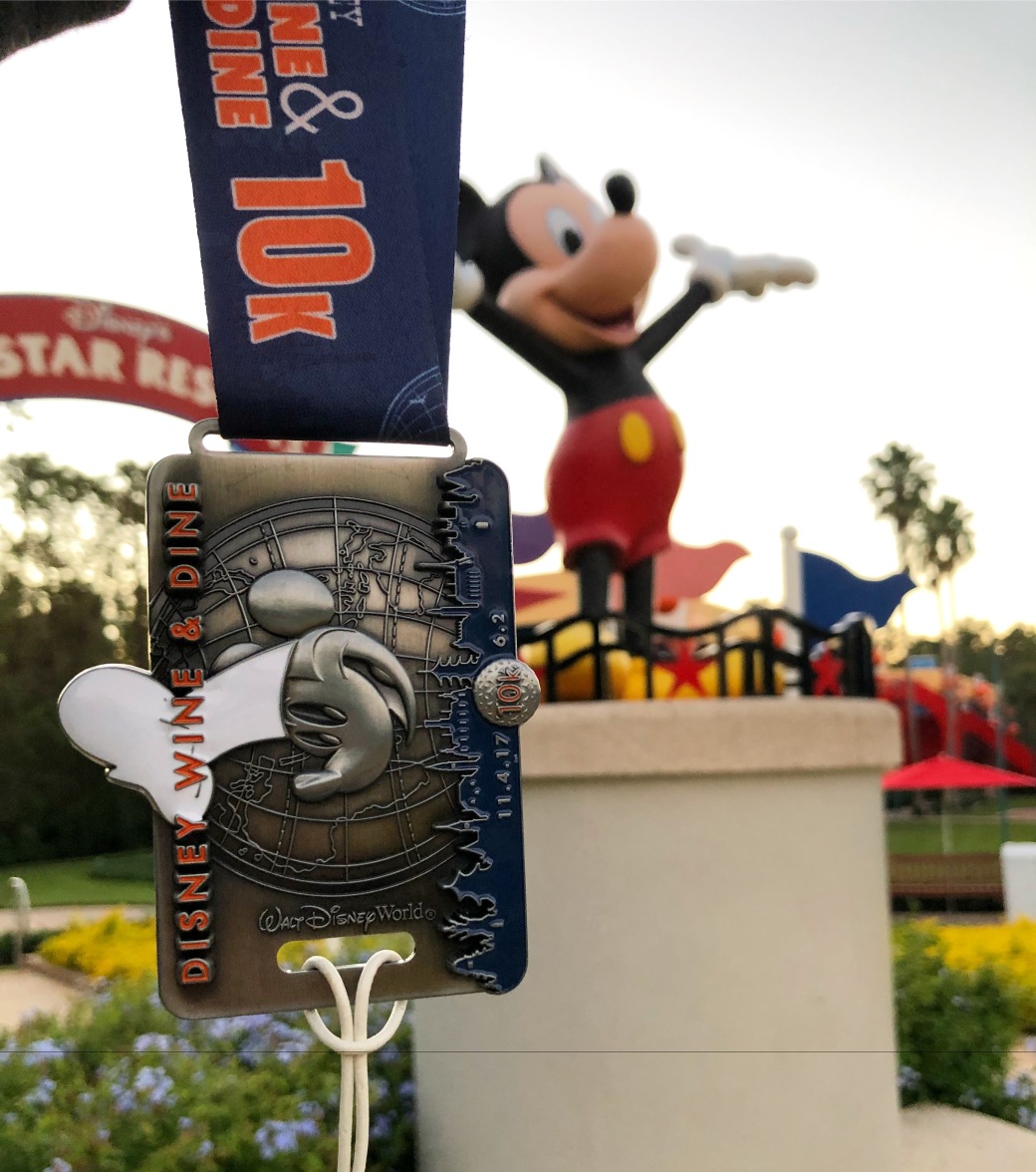 Up Next: Hot Chocolate Scottsdale 15k